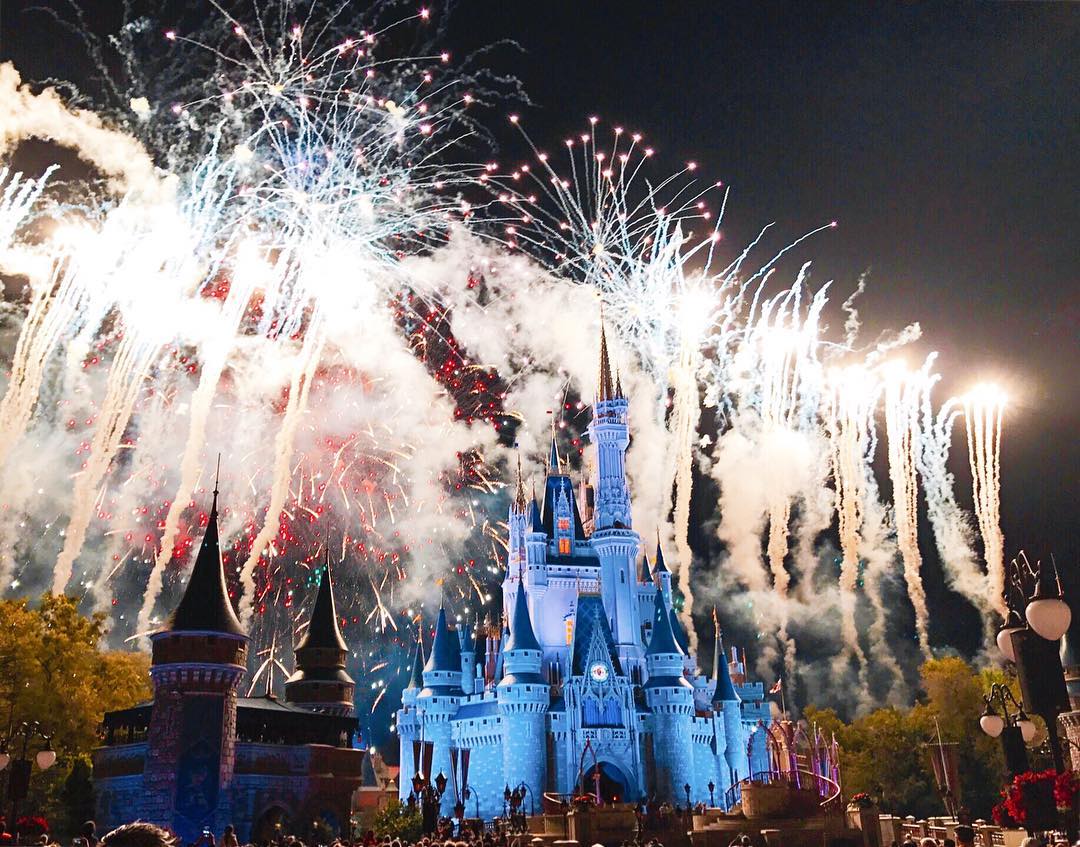 The Magical Kingdom
By Thea Coker

Standing in the middle of the street, she looked angelic. Her dark brown eyes, bright and shining, dashing back and forth, looking up! Slowly she turned around, each direction containing a new vision…drinking in the sights like the taste of something sweet and delicious. For a moment, she was mesmerized, lost in thought and beauty and the glory of it all. Unaware of the hundreds of people passing all around her, she was captured… by JOY! I could see it in her face! I watched her, my sweet little granddaughter, Kiylah.
We were standing on Main Street in Disney, and this was her first time to vacation with us. She was in the first grade and giddy with excitement! Truly, it was magical, as she saw… what she’d never seen before. It was all so large and shiny and she, so small and innocent…lost in the glory of it all. For just a few short moments, she was captured by the “outer and the other” than herself, and the little person she was, was transferred into another world…the Magical Kingdom of Mickey Mouse! It didn’t last but a moment before she remembered where she was and who she was with. Her eyes suddenly looked at us, her grandparents, and a big smile stretched across her beautiful face. Her hand reached for mine. I squeezed it slightly and said, “Let’s go see Mickey”! Her dark brown eyes sparkled with wonder and excitement as we walked towards the beautiful castle ahead and the magic awaiting us! An adventure into a kingdom that she had only read about and dreamed about but was NOW, right there before her, and we were off!

There is something invigorating about the sight of something “outer and other” than yourself. It’s overwhelming and glorious when you lose consciousness of “self,” even if it’s just for a moment. I can only explain it as an explosion of happiness! It happens to you, outside of you, and it captures you and takes you places inside of you that you’ve never been before and whispers to you of another world, of a happy place where you want to live and call home.

All of us know that the glory of Mickey Mouse and his magical kingdom is not real. All the glitz and glamour, the bells and whistles are just make-believe. They offer a few days of new thrills and temporary excitement but then reality hits! It’s not so much fun anymore. Depending on what time of the year you go, how long the lines are, and how tired the kids are, it could be the vacation from you know where! But for most people, it’s a once-in-a-lifetime experience in the “Magic Kingdom” of make-believe! And no one does it better than Disney. I’ve been to Disney many, many times and it has certainly “lost the magic” for this old lady!

My granddaughter Kiylah was extremely happy that first day at Disney. But after 6 hours, she was tired. A long day, with lines way too long and the weather way too hot, she became what she really was, just a little girl that was too tired and too hot to enjoy the thrills anymore. She just wanted to go home. I felt a tug on my hand and heard her whispered cries, “Granny, can we go back to the hotel?”

The hotel had air conditioning, a swimming pool, comfy beds, and later, dinner in a restaurant where she could pick out anything she wanted to eat! Her happy place had changed. To this old woman, my happy place has certainly changed over the years. I used to look for it in people, in the people I loved. They were never meant to be the source of my happiness, but it took years before I realized that!

But I have found my happy place, or should I say, my happy place found me. It’s not really a place but a Person. He found me and my heart then knew what it was to finally be happy. Before I ever put my foot on the floor each morning, I look to the One who made me happy. He is beautiful and He lives in a magical kingdom where He is the Sovereign King. He is kind and loving and full of grace and truth. I kneel before my Maker, I look into His Holy Word, the Bible and I seek Him, longing for the world where I know I belong…my heavenly home.

I remember back in my life when I first accepted the Lord as my Savior. It was a wonderful day, and I will never forget it. I was only 21 years old. I’d grown up in a Christian home and had gone to church with my parents every time the door was open. I had a lot of head knowledge about God, but my heart was still dead towards Him. But at age 21, far away from home, He burst into my heart and captured me with the truth of who I was, a sinner, and who He was, The Heavenly Father who sent His Son, as Savior, to redeem me and make me His own. I fell to my knees crying for mercy, grace, and forgiveness. My heart was opened to a life and a light I’d never known before and to a love that was high and pure and otherworldly. I was adopted into the family of God that day and at age 21 became a child of God. The Bible says that to “as many as received Him (Jesus) He gives them the right to become children of God”.

Like all children, I really did not know the Lord very well, but I knew He loved me, He had forgiven me, He would never leave me nor forsake me, and He’d given us His written Word to read and learn to know Him better. I was still a young woman who had much to learn about this One that came to usher me into His Kingdom of Righteousness. The “outer and the other” invaded my heart and the seed of joy took root. It would grow and eventually take over all other loves. There is an old hymn that says, “This world is not my home, I’m just passing through”. I finally quit looking for love in all the wrong places. LOVE looked at me and gave me life. I cannot see Him, but I love Him. I cannot touch Him, but He is more real to me than what I can see and touch. Sometimes in the early hours before dawn, as I sit before His Word, I feel like my little granddaughter…tiny and helpless, overwhelmed by love and joy by the sight of something “outer and other”, by Someone, beautiful and glorious! I turn the pages of the Bible and see beauty in each direction, the grace of God in Christ, His outstretched hand calling us to Himself. My mother used to tell me you can’t really trust someone you don’t know, so how can you get to know God except by learning to be still, reading, and surrendering to His Holy Word? I believed my mother because her life proved it. Her eyes were fixed on God as He revealed Himself through the Bible. She was the “trailblazer of joy” for me. He was her “happy place” until she breathed her last breath in my arms and then her faith finally gave birth to sight as she took flight to another world and she was home at last!

Sometimes, I picture my little mother in that instant after her death, standing there in heaven, looking in each direction, taking in the beauty…and finally seeing His face…The One she followed for many years…finally hearing His voice, “Jo, you’re home, you’re finally HOME, enter into the Joy of your Lord!” “His Lord said to him, well done, good and faithful servant, thou hast been faithful over a few things, I will set thee over many things; enter into the joy of thy Lord.”(Matt. 25:21)
C.S. Lewis was right when he said; “If I find in myself a desire which no experience in this world can satisfy, the most probable explanation, is that I was made for another world!”

Let’s talk about it:

All In Sunday
February 26